Down the Memory Lane

When I was visiting Sri Lanka in the recent past, I had the oppotunity to meet a few of my long lost relatives from my dad's side. They were present at mother's 1st year death anniversary function held in the house mother lived. Amongst the relatives whom I met, there was this young niece and her mum who's house is located close to dad's native place. In chatting with her it helped me to bring back a few memories in my early childhood, that has long been forgotten. In addition to the young niece, there's also my dad's youngest brother whom we called poddi bappa and his wife are living in the village. Unfortunately though, we haven't been in touch for many years and also they aren't contactable on available technology. So, I haven't got any latest updates about them.

Dad grew up in a remote viilage called Kahanda in the district of Galle in Southern Sri Lanka. His native place was along side Kahanda Howpe Road, Angulugaha. A popular landmark near by his home in the village is Kahanda Maha Vidyalaya - a school, owned & operated by the government for local children. 1 I believe even my dad and his family of sisters & brothers, all obtained their education in this school. So, as my niece up to her 5th Grade and afterwards she has moved to a popular girls school in the city, she told me. After my dad got married, he and my mother had started their marriage life in Matara - district further down in Southern Sri Lanka. Since then my parents have been living and working in many parts of the island as my dad was working for the public service in various parts of the island. As a result, my sisters & I also had to move from one school to another until we finally settled in the capital in mid nineteen seventies. Even though my dad has been living miles away from his native place, he never missed out to make a visit to see our grandparents & any other relatives in the village.Even after the grandparents passed away he continued his visits. Occasionally, he took me also on his trips. These trips were mostly made by public tranport, whilst in some rare occassions, we travelled with lokuthaththa{2. Elder brother of dad] in his [Austin A30]. I recall there were two arms used to pop out either sides in between front and rear doors as indicators when turning the car. They were called trafficators apparently.
(https://en.wikipedia.org/wiki/Austin_A30). Whether the journey was on the public bus or the car, it did not make a much difference in the time & duration taken for travel - at least good 3-4 hours. 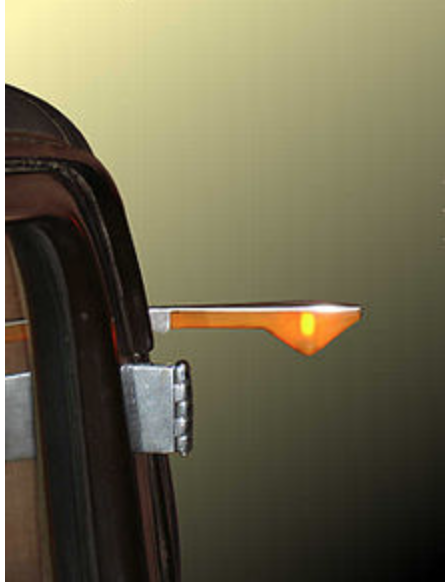 Most of the visits were just limited to day trips, though there had been times that we spent one or two nights in the house dad's brother owned and he & his family lived in before they moved to the capital. Dad's brother's only child is my cousin sister, who I believe obtained her secondry education in the Galle District. She used to own a bicycle and everytime I visited there I used to ask her permisson to ride the bicycle. Although she had no objection, I remember my dad wasn't very happy thinking I might fall or do something stupid. His objections did not stop me, but I used to take the bicyle and disappeared to the gravel road beside my cousin's house. The road had no tarmac and during the rains it was full of water puddles and mud. There had been a few times that the bicycle used to skid and I ended up with bruses all over my arms & legs. When my dad saw me like that he used to get very angry with me. Then there was another growen up cousin sister who lived in a house located on the gravel road. Occassionally, she used to come watch me when I was riding the bicycle. We called her Suddi akka 2.

It has now been more than two decades that I have been to dad's native village and my memories have slowly been fading away until this past week, when I chatted to my niece and asked her to send me a couple of photos in particular the road I used to ride the bicycle. Seeing those images, quite a bit has changed and improved over the years. The road has now been converted to a tarmac road and a few newly constructed properties have come up. What seemed to have not changed is the lush greenery in the neighbourhood though. Seeing these images immediately made me realized the beautiful nature & surroundings with the smell of local villages that I have been missing since I moved out from Sri Lanka. Not just that, people from both my dad's and mom's families & relatives. I miss chatting to them and understanding & appreciating daily chaos they go through in their lives. Next time when I visit the motherland I might as well plan a road trip to these places.