Earlier this week, Monica had forwarded an email  to me that she has received from a friend in the church prayer group asking us to join a few other friends with their spouses to go for a " Valentine’s Ball” a dance organised by a group called ‘Marriage Encounter’ in St Mary’s Church in Dubai. Oh well, when Monica asked me whether we were going; at first I had my apprehensions. Any way, even though she did not say it, I knew in my mind that she wanted to go particularly because all of her close buddies were going with their spouses.So, I did not want to disappoint her and decided that we go for the Ball. It was held on last Thursday night at Sheraton Deira hotel in Dubai. Although it wasn’t extravergant, the organisers had done a brilliant job putting it together. There were about 100 people or so and we had 8 young couples in our group from the prayer group. In addition to music & dancing, there were spot prizes and wedding march. The dinner  buffet featured was Indian cuisine and I had some Indian naan, butter chicken & goan style pork. There was a cash bar almost hidden in a corner of the banquet hall, which offered beer, wine & a few sprints. Chrys and I grabbed a couple of beers and we were the only ones to drink from our lot.  The dance floor was rather small and quite a few people moved their feet out of the dance floor on the floor carpet. We too! There were many among our bunch who took photos and a few of them are posted below. 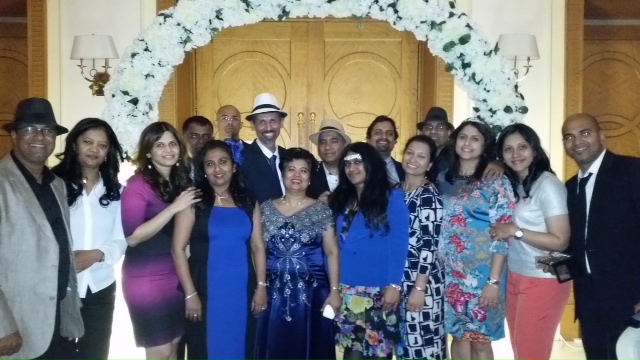